Explore More Episode 7: Why are open spaces vital to our communities and wildlife? 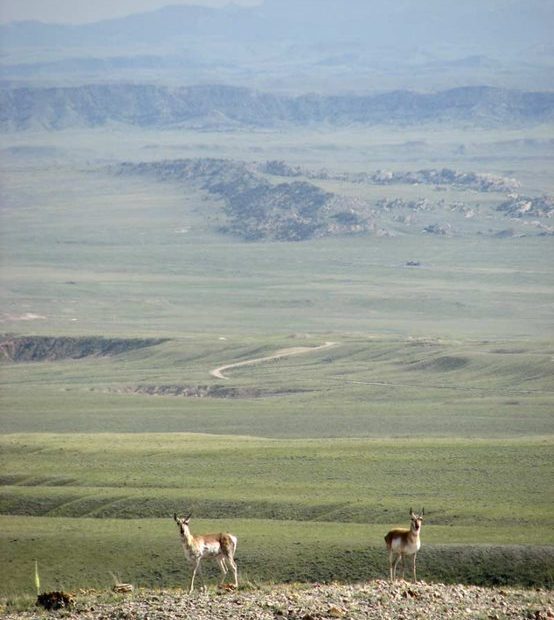 Listen to Episode 7: Why are open spaces vital to our communities and wildlife?

Habitat: The natural home of an organism.

Basin: A depression or low point on the surface of the Earth.

Pronghorn Antelope: Antilocapra americana aka Pronghorn. These are the fastest land mammals in North America. They can run 60 mph for short distances. Pronghorn are herbivores that will feed on sagebrush and grasses.

Rocky Mountain Bighorn Sheep: Ovis canadensis canadensis are the largest wild sheep in North America. A ram may weigh more than 300 pounds. Their massive horns curl tightly close to the face. A ewe (a female sheep) will have smaller horns that curve only slightly. Ewes weigh about 125-150 pounds. In the summer they are found grazing high in the mountains. In the winter, they migrate to lower elevations.

Extinct: When a species no longer exists. All members of the species have died out.

Black-footed Ferret: This is one of the most endangered mammals in the United States. At one time it lived throughout the Great Plains, but it was thought to be extinct by 1967. The ferret was “rediscovered” in Meeteetse, Wyoming in 1987. Members of the weasel family, they are nocturnal carnivores that feed primarily on prairie dogs.

Canada Lynx: Lynx canadensis is a medium sized boreal forest carnivore that lives across northern North America. It has gray fur. They are similar to the more common bobcats (Lynx rufus) in size and appearance, but the lynx has exceptionally large paws, long, black ear tufts, and short, black-tipped tail.

Northern long-eared bat: Myotis septentrionalisa is a medium-sized bat approximately 3-4 inches long. They live in 37 states around the United States, but are currently listed as a “threatened” species. They are particularly vulnerable to the white-nose syndrome.

Preble’s Meadow Jumping Mouse: Zapus hudonius preblei is a small mammal approximately 9-inches in length with large hind feet adapted for jumping. They are nocturnal and live along heavily vegetated streamsides in southeastern Wyoming and Colorado.

Wyoming Toad: Bufo baxteri was a common amphibian on the Laramie Plains, in Albany County, Wyoming, into the early 1970s. Unfortunately, the population crashed in the mid-1970s, and the Wyoming toad was listed as an endangered species in 1984.

Public Lands: Land that is owned by the citizens of a country. These lands are maintained by government agencies and paid for through public taxes.

National Wilderness Preservation System (Wilderness): These areas of land are administered by the United States government and are set aside to be preserved in their natural condition. Wilderness lands can be “maintained” by the U.S. Forest Service, the National Park Service, the Bureau of Land Management, or the U.S. Fish and Wildlife Service. As of 2019, there are 803 designated wilderness areas, totaling 111,368,221 acres (about 4.5% of the United States).

Bureau of Land Management (BLM): This is an agency within the United States Department of the Interior responsible for administering public lands. It oversees more than 247.3 million acres, mostly in the Western U.S. This is about 1/8th of the land mass in the country. Unlike National Parks, some BLM land can be used for resource development. Approximately 30 percent of the Nation’s minerals (like oil and gas) are administered by the BLM.